A while back we discussed an item termed the “Universal Shiviti Amulet,” a poster size talismanic construct comprised of verses from the biblical "Book of Psalms," sets of Divine as well as Angelic Names, and Chotamot (Magical Seals). In expounding its pattern and contents in "The Book of Sacred Names," I addressed in great detail the set of magical and meditational practices associated with it. As indicated previously, amongst the many details comprising this "Shiviti Kame'a" is the following striking image in its very centre: 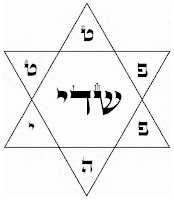 In an earlier essay we noted that it is comprised of the six letters of the Name Taftafyah positioned in the corner triangles of the hexagram. As mentioned in a previous essay on this blog, Taftafyah is considered amongst the most potent Sacred Names, certainly one which, in combination with the “Shield of David” (hexagram), was amongst the most popular protective magical charms of the mediaeval world. In fact, the two interlaced triangles of the hexagram comprise the symbol of Metatron, the holy intermediary between heaven and earth, and the Name Taftafyah is traditionally associated with the biblical King David, who is said to have had this Divine Name engraved on his golden shield, hence one of the uses of the “Universal Shiviti Amulet” pertains to being saved from belligerent people and circumstances by invoking the “Minister of Protection,” Taftafyah, whilst visualising the “Shield of David” (Hexagram) with the six letters of the Divine Name displayed on it. Similarly, Moses Zacutto informs us in his "Shorshei ha-Shemot" that one can dispel anxiety and fear by tracing the Name on the central “Shield of David” (Hexagram) of the “Universal Shiviti Amulet” with the six letters of the Divine Name displayed on it, whilst simultaneously intoning “Taftafyah.”Be that as it may, it is the powerful Divine Name Shadai in its very centre which I wish to address here. As it is, this remarkable Divine Name is a most ancient Divine Name indeed. There has been a lot of debate and speculation as to what the word really signifies. It is generally accepted that it means “Almighty,” however some scholars conjectured that the Name was derived from Shadu, the ancient Akkadian word meaning “mountain.” Thus the “Almighty” would be seen to be strong, fortified, immutable, and it is quite true that many deities in ancient Mesopotamia were associated with mountain-tops, which is why the Sumerians constructed Ziggurats (Holy Mountains) as places of worship.Others tried to prove that Shadai derives from the root “shadad” (meaning “to plunder” and “to devastate”) which would make Shadai a “destroyer” rather than a “protector.” This is a highly unlikely derivation, as the usual purpose for invoking this Name is always for protection, i.e. against demons and magic. The authors of the “Jewish Encyclopedia” thought that the Name could possibly have meant “‘overmastering’ or ‘overpowering strength,’ and that this meaning persists in the divine name.”As said however, the “power of protection” came to be associated with this name, and many written Kame’ot, providing protection against demonic spirits, the “evil eye,” imprisonment, the sword, etc., often start with: “In the name of Shadai, who created heaven and earth.....” There were even hand positions developed in ancient times to reflect this name, e.g. the arrangement of the fingers in the shape used during priestly blessings as shown below: 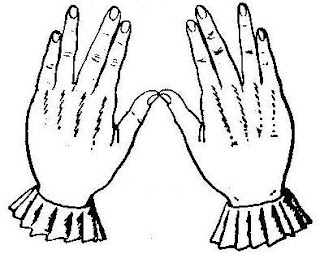 The shape of each hand is meant to indicate the letter

(Shin), the initial of the Name

(Shadai), thus invoking the power and protection of the Almighty. Another of these hand shapes is the famous “Fig” sign of the clenched fist with the thumb inserted between the two forefingers, believed to drive away demons. The ordinary folk used to bend the hands and fingers of their deceased family and friends into this sign, which irked the Rabbis no end. These insisted that their flocks should abandon such heathen customs and straighten the hands of the departed prior to their burial. To the outraged horror of the clergy, the people went a step further and modified the “heathen practice” into shaping and bending the fingers so as to portray the name Shadai.Of course, one cannot mention “Hebrew amulets” and the Name Shadai without reference to the famous Mezuzot (singular Mezuzah) affixed to the doors of Jewish homes, and which Joshua Trachtenberg maintains “retained its original significance as an amulet despite rabbinic efforts to make it an exclusively religious symbol.” He continued stating that in “the Middle Ages it is question whether its anti-demonic virtue did not far outweigh its religious value in the public mind.” He quotes Rabbi Meir of Regensburg’s remark that: “If Jews knew how serviceable the mezuzah is, they would not lightly disregard it. They may be assured that no demon can have power over a house upon which the mezuzah is properly affixed. In our house I believe we have close to twenty-four mezuzot.”The potency of the Mezuzah was believed to extend beyond the protection against demons, as it was also guarding against untimely death. The Zohar splitting the name Mezuzah into zaz mavet (“death departs”) was understood to be a clear reference to the death defying power of Mezuzot. However, having these attached to your doors in ancient days, certainly did not protect you against the suspicions of gentile neighbours, as Trachtenberg reports: “According to Rashi, pagan rulers long ago suspected Jews of working magic against them when they affixed the little capsules to their doors.” But then he also says that “some Christian prelates in the Middle Ages were eager to place their castles, too, under the protection of the humble Mezuzah.”There are very strict rules as to the material, time and place of manufacture of a Mezuzah, but I certainly do not intend to turn this commentary on the magical uses of sacred writ, into a discourse on how to construct Mezuzot. However, one of the striking features of these tiny objects is a little hole or a little window on the front of the container, through which one can observe the Divine Name Shadai or the Hebrew letter Shin (which represents the name). Thus, to this day the Divine Name invoking protection is placed on the doors of every Jewish home who takes the practice seriously, and the power of Shadai is being invoked every moment of the day somewhere in the world.....even as you are reading this.However, from the Middle Ages onwards it appears that this Name was debased to rather lowly purposes, as were many other Divine Names. Folk obsessed with “buried treasure” and hunting everywhere for the hidden hoard, were using divining-rods in their search, and constructed various magical formulas in which the “spirit guardians” of the treasures were exhorted “In the name of El Shadai, the rock of ages.....” to “Leave the silver and gold there.....” etc. I have very little to say about this Name of Power being reduced to such vulgar indulgences serving man’s greed.A much greater consideration of the power and importance of this Divine Name, is the understanding that its force is expressed in the Archangel Metatron. As it is, the gematria of the letters in both the words

(Metatron) equate. Abraham Abulafia wrote in his Chayei ha-Olam ha-Bah (Life of the Future World), “Thus, ‘our way is his strength’ (Dark-enu Koch-o = 314). Likewise, ‘our strength is his way’ (Koch-enu Dark-o = 314).” This is of course the value of Metatron and Shadai. Abulafia continues: “Behold God’s name Shadai. This is Metatron. He is the ‘Prince of Names’ (Sar HaShemot), who speaks the ‘authority of the Name’ [Reshut HaShem].” Note that the Hebrew terms Sar HaShemot and Reshut HaShem contain the same letters. So the understanding that the power of Shadai is within Metatron, would also mean that every time one invokes this Divine Name for protection, etc., one automatically also calls upon the “Angel of the Divine Presence.”
Posted by Jacobus G. Swart at 12:55 PM

Thank you for this enlightening post. I am curious as to the association between the mezuzah and the blood placed on the doorposts during the exodus from Egypt. There seems to be an emphasis on the doorway being a boundary for evil (as in Genesis 4:7).

Do you believe that the blood-sign served as a similar amulet to ward off the destroyer in Egypt? I have found similar allusions in the Zohar (2:25b) to the blood of circumcision being the guardian to the entrance of the body.

I wonder though if we are guarding the evil from coming in the doorway or perhaps the concern is the evil going out.