As can be expected, Hebrew Divine Names comprise the major portion of material addressed in "The Book of Seals and Amulets." The Name

(Shadai) is certainly considered amongst the most important in Hebrew Amulets. As noted in my "Book of Sacred Names," this Divine Name refers to the “All-sufficient Unlimited One,” and whilst there have been a lot of debate and speculation as to what this very ancient Divine Name really signifies, "it is generally accepted that it means 'Almighty'," and "some scholars conjectured that the Name was derived from Shadu, the ancient Akkadian word meaning 'mountain.' Thus the 'Almighty' would be seen to be strong, fortified, immutable....." As it is, the power of protection is associated with this Name, hence it appears as the single Divine Name engraved on the surface of small metal Kameot of all shapes and sizes. I have inspected several such Shadai amulets in the magnificent collection of Hebrew amulets housed in the Magnes Museum in Berkeley.

Be that as it may,

(Shadai), or at least the capital of this Divine Name, adorns the front of every Mezuzah, an item comprised of a biblical inscription which is affixed to the doors of Jewish homes. Whilst it fulfills a religious function in our day, there are many still who, like our mediaeval ancestors, still consider it to be a protection amulet of the most potent kind. As in the case of the Monogrammaton in which a

(Heh) is the single letter abbreviation of the Ineffable Name, the initial

(Shin) represents the Name Shadai, and both of these Hebrew letters appear in this singular format on many ancient and modern amulets.

The letters comprising the Name

(Shadai) are also sometimes arranged in the form of a letter square. In this regard, I have recently perused an amulet ring the front of which is comprised of the following Shadai square:

The Divine Name in question comprises six permutations, which can be traced on this chotam (magical seal). However, the listed format of the Shadai square is by no means standard. For example, this letter arrangement is very different from the following version presented in the famous Toldot Adam:

The six permutations of Shadai (

) are also at times employed in Kameot. Consider the following amulet, the intention of which is to save oneself from plagues and epidemics. The amulet comprises the following Divine Names:

This set of Divine Names were constructed from the initials of the words comprising Leviticus 26:5 reading:

The six permutations of the Name Shadai (

) in the earlier mentioned Divine Name construct, refer to the word

(dayish—“threshing”) in the associated biblical verse, this term being itself one of the permutations of the Divine Name in question. As it is, the mentioned six permutations relate to the twelve zodiacal periods, of which I have perused two versions. In one version the zodiacal months are aligned in pairs in direct order to the six permutations of Shadai, i.e. Aries/Taurus—

; etc. I was taught the following order of Shadai/Zodiacal affiliations, which was said to be correct. It also agrees with related details addressed in "The Book of Sacred Names": 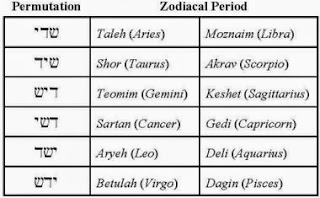 We are informed the Divine Names should be written on a kosher lambskin scroll together with the Shadai permutation pertaining to the month or zodiacal period in which you are constructing the amulet. It is understood that the listed Divine Names act in conjunction with the said permutation, in order to protect a home and all within it from an epidemic or plague. Afterwards it is located at the entrance of ones own or any other residence.

Should you be in any doubt regarding the correct Shadai permutation aligned with the specific period in which you might be composing this amulet, you could simply include all six permutations of the said Divine Name. In this manner, the correct one will be effective at the time, and the rest will, as it were, join the “process of empowerment” over the succeeding months, all depending on how long the amulet remains on your front door.