When I was a little boy I overheard a conversation between a burly Jewish biker, and my paternal grandfather who was trying to convince the biker of the "error of his ways." The gentleman in question used to go on, what appeared to be, long journeys at night on his bike, traversing for no apparent reason the extensive flat-lands of the Free State province of South Africa. When my grandfather advised him to rather stay at home, say his bedtime prayers and retire to bed, the biker said that he was communicating every night with the Almighty. In fact, he maintained that he knew the "secret language" by which creation is being manifested, and that he could read its "unfoldment" in the night sky whilst crossing the open spaces of the Free State.

As my grandfather shook his head in disbelief, and waved the "heathen" away most indignantly, I ran after the biker and asked him if he could teach me how to read the "secret messages" in the sky. He gently informed me the stars are part of the very big saga of the beginning and end of everything happening at once in an enormous, most holy "talisman." He told me that the universe changes all the time in accordance with this ongoing "telling of life in the sky," and that, when I was a little older, he would teach me the very "holy alphabet of creation." Then I too may read the "Word of God" at night in the stars. Being at the time unacquainted with the term "talisman," I wanted to know what it was. In very simple language, he defined it a deliberately constructed "spiritual channel" through which Divine Power can be transmitted for our benefit.

To say that I was deeply impressed by this individual would be an understatement. I was imagining a diversity of huge invisible pipes reaching down from the stars, through which the "Holy Power" of the Divine One is flowing down into our world, in order to affect our lives for the better. Alas, that was the only conversation my biker friend and I would ever have, since he died a short while afterwards in an automobile accident.....during the hours of daylight, when he was not being "distracted" by divine messages in the night sky!

Around twelve years later, when I chanced upon the conception of Guillaume Postel that the will of the Eternal One appears in the vault of the heavens in the form of special Hebrew glyphs, I surmised my biker friend gained his notion of reading the "Word of God in the night sky" either from Postel, or from his admirer Jacques Gaffarel, a 17th century French Kabbalist and librarian to the famous Richelieu, who adopted Postel’s cosmic writing notions, and created the following illustration of the "celestial alphabet" in the ever changing "talisman of the heavens." 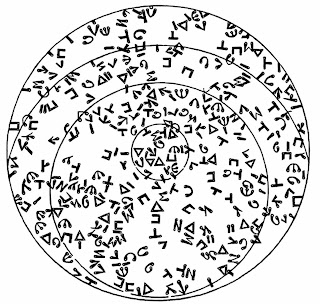 The endings of each letter comprise little circles. Each of these represents a star, sets of which are joined by lines to form the "magical language" of the "celestial alphabet." These constructs are based on the Hebrew alphabet, and Gaffarel derived his version of this alphabet from the "occult" writings of Cornelius Agrippa, as shown in the following table indicating the formats of the "Celestial Alphabet" from Agrippa to our own time: 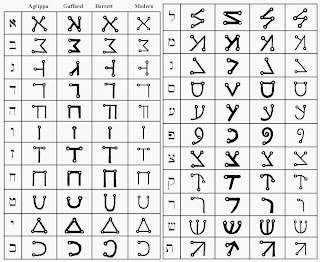 The “Celestial Alphabet” is probably the most well known of all the angelic scripts. As indicated, it appears in a miscellany of calligraphical configurations ranging from simple lines to the following emboldened and outlined format: 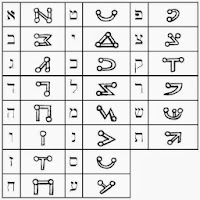 An entire magical system was built around a magical alphabet comprised of glyphs emboldened in this manner. Such "fattened" glyphs are at times employed in Hebrew amulets, as indicated in the following Kamea created for the purpose of finding an answer to a vexing question, or a beneficial response to a special request:

These three names, which we are informed should be drawn in the format of the magical seals listed above, are in fact acronyms of the following angelic names:

The magical inscription, the associated angelic names, as well as five concluding Divine Names should be written on deerskin parchment, or a sheet of clean, good quality paper. The mentioned five concluding Names are:

Afterwards the writing is dissolved in a glass of water, which is then ingested by the one seeking the spiritual response. This is followed by spontaneous prayer which does not include any form of adjuration. We are told that without a doubt, the query will be answered in dream during sleep, and that this is a tried and tested technique.

It should be noted that the first three of the odd sounding concluding Divine Names, i.e.

, are also employed in a somewhat more complex "Dream Question" procedure. In this regard, one is instructed to carefully wash the body from the hips downwards. Afterwards the "Hashkiveinu" prayer is said. It reads:

Help us YHVH to lie down in peace, and raise us up, our King, to life. Spread over us the shelter of Your peace; guide us with Your good counsel, and save us for the sake of Your Name, and shield us from foe, pestilence, and from starvation, sword and anguish. Remove the evil forces that surround us, and shelter us in the shadow of Your wings, El who watches over us and delivers us, and El our gracious and merciful King. Guard our coming and our going, to life and to peace from now unto eternity. Blessed are You YHVH, Guardian of Your people Israel forever.

Next, after donning clean clothes and prior to falling asleep, one has to address the listed Divine Names with strongly focussed intention (Kavvanah) and in great purity, extend the query to which one is seeking an answer in sleep and dream, saying:


Please I request from you pure and Holy Names, to receive in dream this night, in which I put your names under my head, an answer to my question which is [.....state the question.....] I will have no fear and I will not be scared, and I will not forget anything, in the name Argi Nargi Sargi ’gaf N’gaf S’gaf

Afterwards write the Divine Names on a kosher scroll, and place it under your pillow, then go to sleep.
Posted by Jacobus G. Swart at 10:54 PM