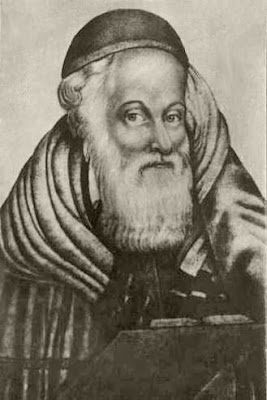 "The following sketch, taken out of Kossuth's boyhood, which he derived from an authentic source, affords a characteristic illustration of that sympathy which the old and pious Jews manifested for their agitator up to the last hour of his dictatorship. Whilst patriotism animated the younger branches, whilst considerate calculations stimulated middle-aged men, cabalistic interpretations actuated the hoary and the aged.

Kossuth's father was an attorney, and resided in a northern department of Hungary, chiefly inhabited by Jewish emigrants from Poland, who have settled there. Among these settlers there is a sect called 'Chassidim' (the pious), who are known by their long gowns, fur caps, and curly locks - their appearance being altogether different from that of native Jews. Kossuth's father conducted a vexatious lawsuit against the Chief Rabbi of Aphely. The cause of it is not known, but it lasted many years, and was carried on with great obstinacy by both parties. In the course of the process, two sons of the attorney died, and, very shortly after, the father also. Prejudice and bigotry spread a report to the effect that this heavenly visitation was in consequence of a curse by the Rabbi; and even the Catholics and Calvinists began to dread the power of the Jewish ecclesiastic. The sick and unfortunate of all religious professions flocked to the Rabbi's house, to be cured and assisted by his wondrous spells.

The Rabbi enjoyed the greatest respect and reverence: he was a shrewd and experienced man, and turned the ignorance of the people to his advantage, as is not unfrequently done by political and ecclesiastical leaders of other creeds. The widow of the attorney, fearing that her last boy, Louis Kossuth, would also fall a victim to the curse of the Rabbi, was induced by maternal love to pay a visit to the bearded Rabbi, and seek his pardon for the offence given to him by her late husband. The Rabbi received the sad widow very graciously, and even favorably, which emboldened the mother to request a blessing for her son. The shrewd Rabbi hesitated, gazed at the boy, and conversed with him. Veracity and high spirit then already distinguished the lad, and the respectful confidence with which young Kossuth surveyed the Rabbi and his suite, had a favorable effect on the venerable ecclesiastic. We omit to portray the state of mind of the wise Rabbi, the anxious mother, and the high-minded lad at that moment - we leave this to a more poetical pen than ours. We will but state the fact, that the Rabbi laid his hands on the head of the child and blessed him. This was considered so great an event in the country, that the family of Kossuth carefully noted down the Psalm quoted by the Rabbi, which was the 60th, and the passage, verse 4, 'Natutta liraecha nes lehisnoses mipne Koshet Selah.' - ('Thou hast given a banner to them that fear thee, that it may be displayed because of the truth.') The Rabbi then impressed on Kossuth's youthful mind not to entertain hostile feelings towards the poor Jews: this injunction was obeyed, and even at school Louis Kossuth distinguished himself by tolerance. These little traits, connected with the boy's growing up a bright and vigorous man, gave the Rabbi a great name and authority.

When Kossuth commenced his political career, he expressed himself at once liberally towards the Jews, who understood how to keep Kossuth's attachment alive, by continually chanting the renowned verse in the synagogues and on all solemn occasions. Kossuth soon promised the Jews the boon of emancipation. He loved the Jews, and they loved him. They shed their best blood in the struggle for Hungary's independence; they rendered him many services, and even his private secretary was a Jew. The emancipation of the Jews in Hungary was proclaimed at Szegedin just before the Russian invasion. The Austrian Government saw the necessity of soothing the fermenting element. Stadion, who had an opportunity, during his residence in Poland, to study the Jewish character, recognised the danger of driving the Jews ( a body of people full of mind and courage), back into their Gheto. It was known at Vienna that Pillersdorf's fall was owing to the non-execution of the principles of religious liberty embodied in his constitution. The Cabinet of Schwarzenberg have acted more wisely, and have carried out the principle to its fullest extent; but the attachment of the Jews to Louis Kossuth remains unabated. The enlightened adore him for his capacious mind, whilst the orthodox revere him on account of the blessing of the Rabbi."

Be that as it may, whilst this report is heavily embellished with unfounded conjectures regarding Rabbi Teitelbaum's motives, the important point is that the good Rabbi did not only cure the young Lajos Kossuth, but that he placed his hands on the head of the child and blessed him with Psalm 60:6 (4), the Hebrew text of which transliterated reads "Natata lirei'echa nes l'hitnoses mipnei koshet selah" ("Thou hast given a banner to them that fear Thee, that it may be displayed because of the truth. Selah"). Apparently the Yishmach Moshe was punning on the term "Koshet" ("truth") in reference to "Kossuth." We are informed that Rabbi Teitelbaum did not only bless the child, but also "prophesied his future greatness." I am reminded of a remark I recently chanced upon, which was made by an individual who wanted "to show somewhat more clearly the religious opinions of the great chief, who so successfully roused the spirit of his countrymen to endeavour to achieve a glorious freedom." In this regard he extracted "from the New York Tribune a prayer, which Kossuth is said to have made on the field of battle," and added "we rather think that pious churchmen will hereafter throw doubts on Kossuth's orthodoxy, as he appears to pray in the manner of Jews, to the 'Almighty God of heaven, earth, and seas'." Here is the prayer which was published on July 28, 1849 in the New York Tribune, and which we are told was offered by Kossuth as he knelt "amid the multitude, at the graves of the Magyar heroes who fell in the battle of the Rapoylna, and was originally published in the Opposition, a journal of Pesht." It reads:

“Almighty Lord! God of the warriors of Arpad! Look down from Thy starry throne upon Thy imploring servant, from whose lips the prayer of millions ascends to Thy heaven, praising the unsearchable power of Thine omnipotence. O God, over me shines Thy sun, and beneath me repose the relics of my fallen heroic brethren; above my head the sky is blue, and under my feet the earth is dyed red with the holy blood of the children of our ancestors. Let the animating beams of Thy sun fall here, that flowers may spring up from the blood, so that these hulls of departed beings may not moulder unadorned. God of our fathers, and God of the nations! hear and bless the voice of our warriors, and with the arm and the soul of brave nations thunder to break the iron hand of tyranny as it forges its chains. As a free man I kneel on these fresh graves, by the remains of my brothers. By such a sacrifice as theirs, Thy earth would be consecrated were it all stained with sin. O God! on this holy soil above these graves no race of slaves can live. O Father! Father of our fathers! Mighty over myriads! Almighty God of the heaven, the earth, and the seas! From these bones springs a glory whose radiance is on the brow of my people. Hallow their dust with Thy grace, that the ashes of my fallen heroic brethren may rest in peace! Leave us not, Great God of battles! In the holy name of the nations, praised be Thy omnipotence. Amen.”

Getting back to Rabbi Moshe Teitelbaum and his activities as "Practical Kabbalist," we are informed the Rabbi wrote many amulets amongst the services he rendered to the community. I am currently analysing two kameot attributed to him, which, like the following one, were included in "The Book of Seals and Amulets": 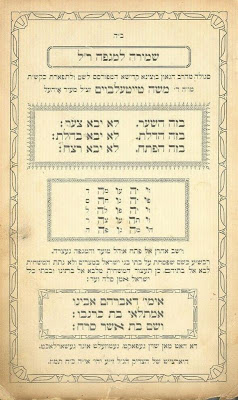 I have also noticed recently an "incantation against the evil eye" attributed to the Yishmach Moshe for sale on a website auctioning Judaica. We might note that Rabbi Teitelbaum's amulet writing skills did not always result in good returns, so to speak. In 1822 he was accused of suppying amulets to individuals jailed on libel charges, in order to aid them in escaping their incarceration. When confronted with this matter, the Yishmach Moshe responded that the amulets were actually substitutes for mezuzot, the purpose of which were to protect those who carried them against dark forces, e.g. demons. Whatever the case may be, I am certainly most grateful to have had the opportunity to pay homage at the gravesite of Rabbi Moshe Teitelbaum, the Yishmach Moshe, and to have done so in the company of a wonderful Companion!
Posted by Jacobus G. Swart at 10:50 PM