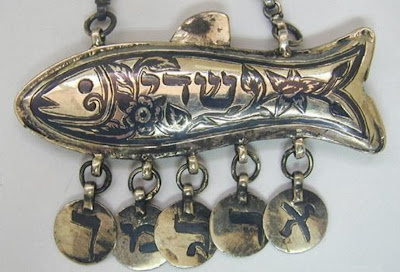 A while back I chanced upon this lovely Shadai amulet for sale on the internet. Its shape reminded me of the importance of fish in Hebrew amulets. As an aside, the Hebrew term

(Argaman), spelled by the five platelets dangling below the fish ornament, is an acronym constructed from the initials of the names of the angels

The symbol of the fish dates back to the whole of the ancient Far and Near East, not forgetting ancient Greece, the Roman empire, ancient Europe, Scandinavia, etc. It certainly predates Christianity by many centuries. Regarding its employment in identifying Christians, the popularity of the fish is witnessed today in its prominent display on businesses, vehicles, websites, etc., most of which belong to Christians of the fundamentalist type. On questioning its display on a keyring, the owner informed me that since it is the sign of the Christian Saviour, the keys can never be lost or stolen. In this regard, I can only imagine how many Christians are employing their “Jesus Fish” for other than symbolic purposes.

Be that as it may, the symbol of the fish is popularly acknowledged in Jewish circles as “a symbol of both good luck and fertility" [Dennis, G.W.: The Encyclopedia of Jewish Myth, Magic and Mysticism, Llewellyn Publications, Woodbury 2007]. The Talmud (Bavli Berachot 20) tells us the “Evil Eye” has no effect on fish, hence the popularity of this symbol in amulets against the “Evil Eye.” In this regard images of fish at one time featured quite prominently at the entrances of private residences, e.g. those of the Jews in Djerba, North Africa. On the other hand, we are told that the fish is a symbol of immortality, and that “the Jewish motif of the Feast of Leviathan might reflect the actual practice, in various religious traditions, of a fish dinner as a foretaste of immortality,” hence its appearance on graves and ancient synagogues [Wineman, A.: Mystic Tales from the Zohar, The Jewish Publication Society of America, 1997].

Amongst the North African Jewish folk customs, an early 20th century traveller named Nahum Slouschz made reference to “a whole series of beliefs which have sprung from the cult of the fish, a cult the traces of whose ancient predominance may be found scattered across the whole Mediterranean. Thus, the Jewish fortune-tellers practise divination with fish. At Tunis, even at Tangiers, there are certain kinds of fish which it is forbidden to eat, on account of their use in divination. It is not in good taste to use the word ‘hut’ (fish), its use is replaced by the phrase Mta el hara or el bahra (beings of the sea)” [Slouschz, N.: Travels in North Africa, The Jewish Publication Society of America, Philadelphia 1927].

Interestingly enough, I have investigated an amulet in which fish scales feature rather prominently. This amulet is said to be good for everything. In this instance the following eighteen tri-letter combinations should be written on one side of the skin of a fish with its scales still intact, i.e. one tri-letter combination per scale:

Afterwards, the following word square is written on the opposite side of the same skin:

The letter combinations in the magic square comprise an arrangement of a phrase derived from 1 Samuel 1:17. It reads:


YHVH God of Isra’el grant thy petition that thou hast asked of Him.

In this instance the Ineffable Name was added as a prefix to the biblical phrase, and there have been some minor adjustments in the component words in alignment with the basic intention of the Kamea in question, which is plainly the granting of an earnest request. However, there is no instruction on what to do with the fish skin afterwards. I surmise one might place it in a little bag to be carried on ones person.