As far as its employment in Hebrew amulets is concerned, Psalm 67 features particularly prominently in protection amulets, and whilst we have thus far looked at complete Psalms or large sections comprising several verses being used in Kameot, entire Psalms or verses therefrom are often employed in abbreviated formats in Hebrew amulets. Such condensations are considered equally as effective as the Psalm it represents. Taking Psalm 67, the “Menorah Psalm,” as a case in point, we note that the entire Psalm was abbreviated, with its traditional menorah format maintained, in order to fit on fairly small metal amulets, as indicated in the following Shiviti Kamea: 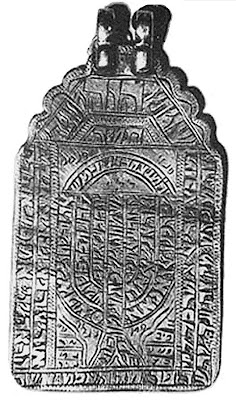 This amulet comprises a superscript from Psalm 16:8 reading

(Shiviti YHVH l’negdi tamid—“I have set YHVH before me always”), hence the appellative “Shiviti” amulet. The right outer, bottom, and left outer border of the construct comprise an abbreviation of Numbers 8:4, with the left border including both the conclusion of the said verse, as well as an abbreviation of Genesis 49:18, as shown below:RIGHT OUTER BORDER DOWN

“And this was the work of the candlestick, beaten work of gold; unto the base thereof, and unto.....”

“.....unto the flowers thereof, it was beaten work; according unto the pattern.....”

The method of abbreviation employed here is “Serugin” or “trellis writing,” which is affiliated to the Kabbalistic system of Notarikon, which I have defined in “The Book of Sacred Names” to be “a sort of short-hand, or system of acronyms. Notarikon is therefore a method in which the single letters of a word, become words themselves.” In the case of the Serugin method, an entire chapter can be condensed by employing the initials or the first two letters of a word. In this regard, Psalm 67 was compressed in the Shiviti amulet in the following manner:CENTRE TOP: ARCHED SUPERSCRIPT

[First two letters of the first five words; and the initial of the concluding word]

[First two letters of the first five words; and the initial of the concluding word]

[First two letters of the first word; and the initials of the following five words]

[Initial of the first word; first two letters of the following two words; and the initials of the concluding three words]

[Initials of the first six words; and the first two letters of the concluding word]

The remaining portions of the Shiviti amulet comprise:RIGHT INNER BORDER DOWN

CORNERS ABOVE THE ARCH OF THE MENORAH SUPERSCRIPT


BELOW THE MENORAH PSALM

The initials of the concluding two words of Genesis 49:22 reading

Each of the items constituting this amulet, are dealt with separately in "The Book of Seals and Amulets," and much of the mentioned material has been fairly extensively addressed in "The Book of Sacred Names."Be that as it may, it should be noted that whilst this Shiviti Kamea was created to protect a woman in childbirth, against the “evil eye” and the demoness Lilith, the “Menorah Psalm” is also abbreviated on Hebrew amulets, as a call for help by individuals who find themselves in grievous circumstances. In this regard there are Kameot constructed from only the initials of the words comprising this Psalm, all of which were configured into a set of eighteen letter combinations as shown below:

Whilst this presentation is certainly a lot simpler than the method employed in the Shiviti Kamea, those who prefer an even quicker and somewhat easier “call for spiritual help” when they find themselves in dire need, have noted that single verses from the same Psalm can equally be employed on Hebrew amulets in the same abbreviated manner, e.g.

verse 1 and 2 reduced to

Any of these abbreviations could be applied for the very same purpose assigned to the entire Psalm.In conclusion, it is worth noting that a very special Divine Name,

, was constructed from the initial of the first words of verses 2 to 8 of Psalm 67. This Name is said to pertain to the wonders of the sacred incense (k’toret).