I am currently investigating the magical uses of the Divine Name

, YHVH, derived from the interchange of Hebrew glyphs using the Atbash

cipher. This specific variant of the Ineffable Name is said to mean "God protect." I am sure most individuals interested in western esotericism will recognise the Name Matz'patz from its appearance in the ever popular "Clavicula Salomonis" (The Key of Solomon). In this text it is employed in a specific adjuration of "demons." However, it should be noted that in the Sefer ha-Zohar the Name

is said to pertain to the concept of "mercy." In this regard we read concerning the biblical statement that "God made the two great lights" (Genesis 1:16), that the pair of "lights" were "at first in a single bond, mystery of the name complete as one: YHVH Elohim," and that the term "great" indicates that "they were enhanced in name, both alike, to be called by the mystery of all: Matz'patz Matz'patz, supernal names of the thirteen qualities of compassion," furthermore, that "they are supernal, from the mystery on high, ascending for the benefit of the world, so that through them worlds endure." (Zohar 1:20a) The "thirteen qualities of compassion" are based on Exodus 34:6-7 reading "And YHVH passed by before him, and proclaimed: 'YHVH YHVH, El merciful and gracious, long-suffering, and abundant in goodness and truth; keeping mercy unto the thousandth generation, forgiving iniquity and transgression and sin," etc. Daniel Matt, translator of the excellent Pritzker edition of the Zohar, commented that in Kabbalah the "thirteen qualities of compassion" are said to "originate in Keter, the highest sefirah, the realm of total compassion, untainted by judgment." It has also been indicated that it is in this respect, i.e. divine Mercy, that the name Matz'patz is employed in Hebrew magical incantations and Kame'ot (amulets). Now, whilst

is, as indicated earlier, a variant of the Ineffable Name, there is a close association between this Name and Elohim, the latter having been earlier noted in the "YHVH Elohim" combination, titled "the Complete Name" since it represents the union of the divine qualities of "Compassion/Mercy" and "Justice/Severity." We are told the connection between Matz'patz and the Name Elohim is indicated by the Gematria (numerical value) of this variation of the Ineffable Name being the same as that of the full spelling of the five letters comprising the Name Elohim, as shown below: 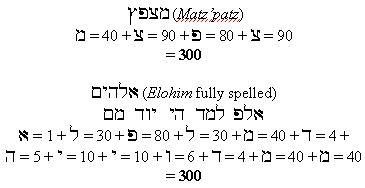 There are exactly thirteen letters in this expanded spelling of the Name Elohim, which Chaim Vital informed us pertain to the mentioned "thirteen qualities of compassion." To align oneself with these qualities, he maintained in his "Sha'ar Ru'ach ha-Kodesh" (Gate of the Holy Spirit) that you must constantly work the following simple Yichud. You commence by visualising and contemplating the listed thirteen letters comprising the expanded spelling of the Name Elohim, and conclude by contemplating this Name to pertain to the sphere of Malchut, the Kingdom on the sefirotic Tree, and that it includes the thirteen qualities of Divine Compassion. There are also other ways in which the Name Matz'patz is employed for more magical purposes, amongst which is a most interesting procedure listed in a text titled "Refu'ah v'Chayim m'Yerushalayim" by Eliahu Avraham Mizrachi, which is employed to ascertain whether individuals suffering from a serious malady will survive or succumb to the illness. You commence the practice by getting everyone in the residence of the diseased to keep quiet, and then ready yourself for the procedure. Next, place your right foot on the doorstep of the entrance to the residence of the sorely afflicted individual, and say the following with Kavvanah, i.e. full focus and conviction:

Translation: Matzapitza of life inform me if (.....fill in the name of the afflicted person.....) is inscribed for life or not.

In conclusion you have to recite the Names which are derived from Psalm 139:16 reading:

Translation: Thine eyes did see mine unformed substance, and in Thy book they were all written—even the days that were fashioned, when as yet there was none of them.

Note that you do not need to pronounce the actual said verse but only the Divine Names derived therefrom, of which we are informed the correct ones to be:

We will address more of the "magical" uses of Matz'patz in the second part.
Posted by Jacobus G. Swart at 4:04 PM

Dear Jacobus. It was wonderful to meet you. Thanks for the coffee and your time and my apologies for making you rush.

I've just started reading the book you gave me and it is so lucid and makes such good sense. And so, if it's OK, I'll be following this blog too. Though it looks rather advanced.

Dear Phil, It was so delightful meeting you!! I hope we can do so again some time soon, and the "rushing" wasn't an issue at all!!

Which is the most powerful name to repeat as a mantra or visualize for self-healing, as there seem to be strong arguments for all the following: