Amongst the most important uses of the names of the four “Edenic Rivers” is in amulets to promote a long life. In this regard the standard arrangement of the names are permuted, written forwards and backwards, and the component letters of the names intermingled in special ways. Whilst there are variations on these arrangements in Jewish magical tomes, I have consulted as many primary texts as I could find, including paying very close attention to their appearances on a variety of Hebrew amulets, and after careful consideration have settled on the following list:

A friend of mine, a Rabbi from Moroccan descent, insisted emphatically that this amulet is not only for “a long life,” but for a “long SUCCESSFUL life.” I have perused a number of amulets comprising these sets of names, and noted that it is usually customary to engrave section A on the front side of a metal disc [usually silver], with a header in certain instances comprising the earlier addressed

(YHVH Ehyeh Adonai YB”K) combination of Divine Names. However, this header is not standard throughout, since I have noted different headers accompanying the same, e.g. the fully spelled letters of the three associated Divine Names, the first two being written as a header, and the third as a footer as shown below: 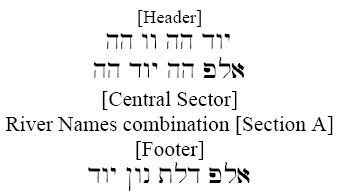 In this instance the YB”K combination is omitted on the front of the amulet, but it does appear on the rear. As it is, more often than not the back of these specific amulets comprises the set of names derived from the intertwined component glyphs of the “River Names” as shown in section B above. This portion of the amulet is sometimes also accompanied by a header, e.g. the three associated Divine Names and the full spelling of the component letters of the first two Names, whilst the full spelling of the letters of the third Divine Name as well as the YB”K combination is added as a footer. In the same instance, the entire construct is completed with a repeat of the affiliated Divine Names. The rear of the amulet then appears like this: 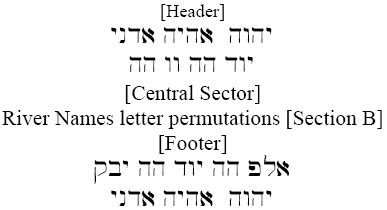 Whilst the headers and footers of this specific amulet might appear quite complex, simpler versions in which the

combination only heads the entire construct. I have also perused an amulet in which the front of same construct is headed by the Divine Name

(Shadai) only, whilst the rear is concluded with a footer comprising the name of the owner. Of course, the simplest format is to plainly engrave the names of the four “Edenic Rivers” without any of the complexities of permutations and conjoining of component letters. For example, I perused an amulet of this nature comprised of nothing more than the name of the bearer as a header, followed by the Divine Name

(Taftafyah) and the names of the four rivers written in the standard manner, with the addition of a single permutation of each name. Here is the complete construct: 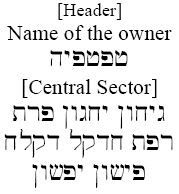 In this instance the front and rear of the amulet are exact copies. (More to follow)
Posted by Jacobus G. Swart at 11:10 PM No comments:

Suspecting that there was a lot more to the four “Edenic Rivers” than meets the eye, Kabbalists closely scrutinised the names of the four streams. By means of somewhat complex application of Temurot, in this instance exchanges of Hebrew letters by means of six special ciphers, i.e. Achas Beta, Atbach, Atbash, Albam, Avgad, Ayak Bachar, they concluded that, with the exclusion of the final letters Nun of the names PishoN and GichoN, the first three names of the “Rivers of Eden” are hidden references to the three Divine Names which are vital for our continued well-being on this planet. It is also understood that the three letters derived from, or, as it were, “hidden” within the name of the last “river,” is indicating a very unique Hebrew abbreviation. The Divine Names and mentioned abbreviation are shown below [read from right to left]:

Of course, the three Divine Names are immediately recognised, and, considering the Kabbalistic doctrine on the flow of the “river of Shefa” (Divine Abundance) into manifestation by means of tzinorot [spiritual channels] which are “controlled,” so to speak, by these important Divine Names aligned with the sefirot of Keter [Crown - Ehyeh], Tiferet [Beauty - YHVH] and Malchut [Kingdom - Adonai], it is only natural that they should be included in amulets comprising the names of the four divisions of the Edenic “River of Life.”What remains to be considered is the unique transposition of the three letters of the “river” Frat, i.e.

. Since the three letters in question could be read Yabok, i.e.the river where the Patriarch Jacob wrestled “a man” (Genesis 32:23–31 [24–32]), and, as mentioned in my “The Book of Sacred Names,” it was ascertained from this saga that Jacob wrestled with the angel Pani’el, and that his attacker was actually the Almighty virtually in person, so to speak, some curious deliberations could be derived from the Frat/Yabok affiliation. After all there are also very special “numerical” connections between the YBK letter combination and two Divine Names, i.e. the gematria of Yabok

. However, in the current instance the YB”K letter combination is generally conceded to be an abbreviation. On the one hand it refers to the concluding portion of Psalms 20:10 reading

(ya’aneinu b’yom kar’einu — “answer us in the day that we call”), the verse being uttered three times during morning prayers [see for example the Kabbalistic Siddur Kol Yaakov by Yakov Koppel Lifshitz], on the other hand it indicates

(yichud b’rachah k’dushah — “Unification Blessedness Holiness”) [see Toldot Yitzchak by Yakov Yitzchak ben Asher, Ha-Kami’a ha-Ivri by E. Davis & D.A. Frenkel; Mikra’i Refu’i Kelali im Tatzlumim v’Iyurim Rabim Ner Mitzvah b’Torah Or by Shniori, etc.].As it is, the three letters in question and the words comprising each of these Hebrew phrases, are themselves understood to be direct references to the three mentioned vital Divine Names. In fact, the “Divine Unification,” “Blessedness” and “Holiness” of YB”K are said to indicate the union of Keter [Ehyeh], Tiferet [YHVH] and Malchut [Adonai], or the “unification” of the Neshamah, Ru’ach and Nefesh, the “Higher Self,” “Middle Self” and “Lower Self” aspects of the human soul [see the very interesting observations by Chananya Yom Tov Lippa Daitch in Mishnayot Masechet Mikva’ot (Vol. 4), and those of Meir Paprish [Poppers] in Or Tsadikim v’Derech Se’udah]. (More to follow)
Posted by Jacobus G. Swart at 5:52 AM No comments:

Whilst investigating primary Jewish magical literature, with special attention on Hebrew amulets which is the subject of my "The Book of Seals and Amulets," I chanced upon very interesting mystical and magical teachings regarding the four rivers of the Biblical "Gan Eden." As you probably recall, we are told that "a river went out of Eden to water the garden; and from thence it was parted, and became four heads" [Genesis 2:10]. Tradition would have it that the original river is the "River of Life," which is channelled by its four divisions into the whole of manifestation. These, named Pishon, Gichon, Chedekel and Frat, have a number of specialised functions in Jewish magical traditions, and, in the age old tradition of the "Doctrine of Signatures," are aligned with a set of unique correspondences. The 13th century Rabbi Isaac of Acco lists some of these in his "Me’irat Einayim," of which I think the following will be of great interest to readers interested in Jewish magic and the doctrines of the Western Mystery Tradition in general:

The addition of four associated Sefirot are mentioned elsewhere, these are respectively Chesed (Lovingkindness/Mercy) = Pishon, Gevurah (Strength/Severity) = Gichon, Tiferet (Beauty) = Chedekel, and Malchut (Kingdom) = Frat. I am sure some of these correspondences might be startling, and quite at odds with what some readers may have learned previously. However, I believe one should not be too concerned about the "rightness" or "wrongness" of any of these attributions, since there are many variances to be found in this regard, not only between mainstream Kabbalah and the Christian or Hermetic varieties, but even within the far too glibly considered "uniform doctrines" of "Jewish Kabbalah." I believe a knowledge of affiliated traditions, i.e. traditional astrology, etc., and a good dose of common sense, will soon clarify matters.
Besides this, there are the "magical" applications of the names of the four "rivers" to consider. Since these streams are believed to be channelling the primordial "River of Life," it is thought one could, as it were, "invoke" their respective powers by means of their names, hence the appellatives Pishon, Gichon, Chedekel and Frat are considered "Names of Power," and as such are used in Hebrew amulets, incantations, and magical healing practices. I thought I might share some with you.
Amongst the more simple magical applications there is one delineated in the "Sefer Rafael ha-Malach," which pertains to the alleviation of all kinds of fever. In this regard an apple is selected on which is written with ink in simple graphics the names of the four Edenic rivers. The procedure necessitates that the apple is first divided into four parts, then the four names are respectively written on the four portions, i.e. one name for each part. The afflicted individual is then fed the four sections of the apple in the exact order of the listed names, i.e. the part with the name Gichon on it is consumed first, thereafter the Pishon portion, followed by the Chedekel one, and concluding with the Frat section. We are told that God willing, the fever will abate and the sufferer healed.
(More to follow)
Posted by Jacobus G. Swart at 12:46 AM No comments: