Since this topic is quite extensive and needs to be addressed in detail, I thought it prudent to address the kabbalistic views on the twenty-eight "Lunar Mansions," and associated concepts in installments. Readers who are familiar with Hebrew will find a lot of details regarding the "Lunar Mansions," or more accurately "Lunar Times" (

[Ittot]—"times" ), in the "Commentary on the Sefer Yetzirah" attributed to the Raavad. There are facsimiles of both the 1562 and 1806 editions available in electronic format, which you can access directly at:

Further details can also be found in the Tikunnei Zohar section 69, 101b - 102a. The twenty-eight "Lunar Mansions" pertain to the twenty-eight days of the lunar month, or more precisely of the "sidereal month." This topic was of particularly importance in Chinese, Japanese and Hindu astrology, and the "Lunar Mansions" featured equally strongly in Islamic Astrology. We should acknowledge the contribution medieval moslem astrologers like Abu'l-Rayhan Muhammad ibn Ahmad Al-Biruni ("The Book of Instruction in the Elements of the Art of Astrology") made to the study of the twenty-eight "mansions" of the moon, and how greatly "Lunar Astrology" impacted on the Jewish mystics who resided in Moslem lands in the Middle Ages, like for example those who lived in medieval Yemen, where the twenty-eight "mansions" played an important role as "markers" in Yemenite agriculture customs. Whilst this aspect of Lunar astrology was derived from ancient oriental sources, it was given a unique treatment in Kabbalistic traditions, involving special verses from the Hebrew Bible, the seven "double letters" of the Hebrew alphabet aligned with "seven Sefirot," "seven seals," as well as the "seven planets" of traditional astrology. These are in turn associated with a set of Divine Names, and finally the entire caboodle was worked into a harmonious whole with the twelve signs of the Zodiac, etc. Most importantly, the Kabbalistic approach to this topic pertains to the Shechinah, the "Female" aspect of Divinity, or the "Divine Presence" in manifestation, specifically to "Her" being associated with "time." In this regard, the Zohar (1:198a) informs us that

(Et - "time") is "a supernal rung." It continues by asking "And who is this Et?" to which we are told that it is the letter

(Heh), and then, by adding the letter Heh as a suffix to Et, further elucidates that "it is called

(Atah)," a term meaning "Now." Daniel Matt explained that the reason for "time" being "a supernal rung" is that the Shechinah "is known as 'time' since She conducts the world according to a cosmic schedule, enabling phenomenon to unfold in its proper time," and further that "She is also symbolized by the letter

(Heh), the final letter of the divine name

(YHVH)." (Zohar Vol. 3, Pritzker Edition) Since the Shechinah is traditionally associated with both "Time" and the "Moon," we can understand why the twenty-eight "Lunar Mansions" are collectively considered to be, as it were, an expression of the "Divine Presence" in manifestation. Furthermore, these twenty-eight Lunar Ittot (times) are associated with the twenty-eight "qualities of time" listed in Ecclestiastes 3:1-8 reading:

Note there are fourteen benevolent "times" and fourteen malevolent ones. Kabbalistically speaking these are considered to pertain to the "good" and "bad" time cycles of the twenty-eight "Lunar Mansions," fourteen from the aspect of Chesed (Mercy or Benevolence) and fourteen from the aspect of Din or Pachad (respectively "judgment" and "fear," also Gevurah). As an aside, it is worth perusing the exposition of Et Tovah ("good time" also Et Ratzon ("time of favour") and Et Ra ("bad" or "evil" time) in "Gates of Light" (Sha'arei Orah) by Joseph Gikatilla [see page 103–104 in the Avi Weinstein translation]. Now, the fourteen positive and fourteen negative aspects listed in these verses were arranged in a particular manner in Kabbalah to coincide with the seven "double letters" of the Hebrew alphabet, as well as with the seven attributes or qualities associated with these letters. According to all the manuscripts of the "Saadia" and "Long" versions of the Sefer Yetzirah I have consulted, which is quite different from the much later and currently very popular "Gra version," the seven "attributes" are associated with the "double letters" in the following manner: 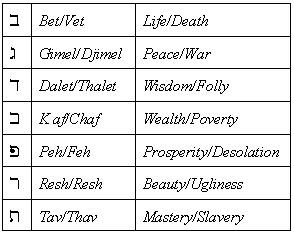 Aryeh Kaplan maintained the order in which Kabbalists associated these attributes with the mentioned twenty-eight "times" in Ecclesiastes 3, to be "somewhat different than that of the Scripture." ("Sefer Yetzirah: The Book of Creation in Theory and Practice") He also mentioned that it does not correspond to the order found in the Sefer Yetzirah. Accordingly the order is said to be: 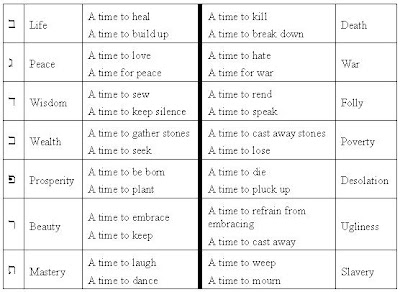 Very interesting. I was contemplating whether the seven "lights" could correspond to the lunar mansions and, perhaps, the hebrew elements and came across this. From this article, it does seem that a planet rules over each lunar house. I had though that "moon times" referred to lunar months, not mansions. I appreciate you taking the time to share your views and wisdom.