An Amulet to Break Evil Spells

It always comes as a surprise to me that the instant one is concentrating on a specific magical application, a query would seem to appear, seemingly out of nowhere, in direct relation to the very topic one is engaged in. In the current instance I am referring to an individual quizzing me on the possible use of amulets to counteract "evil spells." As it is, I was just writing a short insert on this very topic to be included in "The Book of Seals and Amulets." Whilst I have subsequently shared the amulet pertaining to this matter with the mentioned querant, I thought I would share the same here. The item referred to is the following simple Kamea: 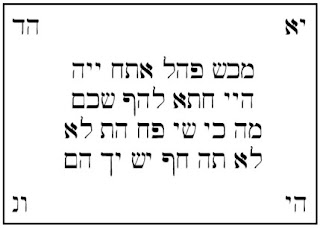 This curious amulet, employed to cancel all magical spells of both the written and spoken varieties, is constructed from the three words of Exodus 22:17 [16] reading

"Thou shalt not suffer a sorceress to live."

Note there is an additional

(yod) in the amulet, this being included in the word

. The reason for this appears to be the "harmonising" of, as it were, the "incantational order" of the letters comprising:

a. the initial of the first word of the verse in question conjoined with the concluding letter of the third word;

c. the third letter of the first word combined with the additional

(yod) in the amulet;

f. the interchange of the two letters comprising the second word.

In conclusion, the entire construct is hedged in by the well-known conjugation of the Divine Names

(Adonai), i.e. (YAHDVNHY—"Yahadonahi"), the component letters of which having been divided into four groups of two letters respectively located in the four corners of the Kamea. Commencing top right, the entire word can be traced, right-left-down-right, around the construct.On sharing this amulet on the "Concepts of Kabbalah" Yahoo egroup (http://groups.yahoo.com/group/Kabbalahconcepts/), I was queried as to whether the fact that the term m'chashefa (sorceress) in the Biblical verse employed in this Kamea, would pertain to a man casting the "evil spell." In this regard, we might recall that in the overtly "sexist times" when that portion of the Bible was written, it was generally believed that sorcery was mainly practiced by women.However, in Practical Kabbalah there is no particular interest in whether the verse in question refers to a male or a female, since the actual Hebrew text is considered a powerful incantation against ALL magical spells of the malevolent kind, whether perpetrated by men or women. The fundamental reasoning here is that the Hebrew letters comprising the verse in question, are basically the "bodies," so to speak, of powerful "Spirit Intelligences," these being "channelled" in the mentioned manner in order to obliterate all "baneful psychic influences."Curiously enough, the amulet in question was tried and tested successfully by a woman who was impacted malevolently by a male "sangoma" (African medicine man). According to the lady in question "the Kamea worked like a dream!"

The amulet does it work automatically?

or should we consecrate it in any way?

This Hebrew amulet is indeed considered to "work automatically." However, I do not think it problematic to "personalise" or "activate it, so to speak, in any manner suitable to the individual employing the support of the amulet. In this regard, a technique I personally employ is to direct spiritual force, i.e. Ruchaniyut, via the hands into the object. There is no hard and fast rule about this, but I have witnessed individuals "empowering" items such as these by adding something as personal as a small drop of blood to its surface. In this regard, I would also recommend "internalising" the amulet, first by scanning the rows of letters from right to left a couple of times, then by starring at the entire construct in a sort of "soft" manner, followed by taking an inhalation as you simultaneously imagine that you are drawing it into your being, and concluding by closing your eyes and on the succeeding exhalation, to allow the "after-image" to sort of "fall" into the centre of your being, this being located somewhere in the region of the solar plexus. In this instance nothing more is really required to personalise the Kamea.

Can Muslims use it ?

In my estimation anyone can use it. However, I am not a muslim and do not know if your religion would preclude the use of Hebrew Divine Names, or for that matter, allow the use of spiritual techniques of the magical kind. Personally speaking, whatever your belief system, I do not believe you will derive any negative result from employing this technique.

How about you just write the verse down on paper, then put it in your pocket? Would that work the same way? (I'm serious)

I have witnessed such usage of the said biblical verse in Hebrew amulets, and have addressed it to some extent in "The Book of Seals & Amulets." However, in every instance the inscription is in Hebrew, with the three words comprising the phrase permuted in every possible way, as shown below:

In other words, you would need to write the biblical phrase six times in the manner delineated, which you can then wear on your person as an amulet against "Spells," or the "Evil Eye" for that matter. Permuting words from Hebrew phrases in this manner is believed to powerfully release and channel the Spiritual Power, the Ruchaniyut, behind or inherent in those words.