I have been perusing a variety of written amulets being sold online, and noted in several instances a great mishmash of differing amulets being conjoined in a single Kamea, and sold at hefty prices as a legitimate item which would bring the bearer great fortune. The fact of the matter is that in several instances, the variety of Divine and Angelic Names, including magical seals, merged in such a willy-nilly manner, are respectively applied for a number of quite divergent purposes, hence they should not be intermingled in a single amulet. Of course, it is perfectly clear that there are "soferim" (scribes) who are not only keen to devote themselves to writing and selling amulets, but all too eager to impact the minds of potential clients with impressive seals and signs. It would seem they think this approach would generate the best possible prices for their fanciful talismanic constructs, and they appear to be wholly indifferent to the fundamental influences of the active "psycho-spiritual potencies" triggered and channelled by the amulets in question.It is worth noting that much of this amalgamated material was derived directly from the "Shorshei ha-Shemot" by Moses Zacutto. As it is, the author of this seminal text on Jewish Magic, delineated in the greatest detail the construction and employment of each of its listed amulet, hence there is nothing to be said in mitigation of a mindless approach to Hebrew amulets. For the sake of interest, let us consider the following set of Hebrew words and angelic names aligned with magical seals, which were conjoined with several divergent magical signs and seals in a complex contemporary amulet said to bring "good luck," etc. 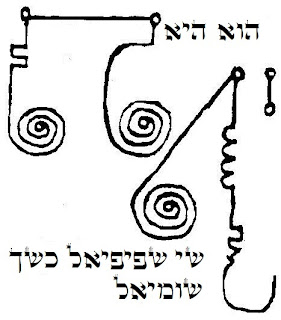 This amulet is basically recommended to individuals wishing to rise in prominence. So if anyone wishes to increase his or her social status, etc., they could create this amulet by tracing the magical seals and writing the words and names on a piece of deerskin parchment. Regarding the latter, which may be hard to acquire today, I have noted that a clean sheet of high quality paper will do nicely. The amulet is then worn on the person of the individual requiring this support, and, we are informed, the said individual will then be perceived by all and sundry with great love and affection.We are further told that if anyone should desire to grow and succeed in all his or her endeavours, then that individual should draw the seals and write the names of this amulet on the lines of the palm of his or her hand. In this instance the procedure is concluded by uttering the following incantation:

May it be your will YHVH My God, and God of my fathers, God of the Hosts, in the power deriving from the names and the seals for me to have success in all that I want to.

As said, there are Hebrew amulets doing the rounds in which this Kamea is combined with unrelated material, in fact, conjoined with certain seals and signs which many might loath wearing on their persons. Maybe I am just overly fussy, but I personally prefer to be informed regarding the methods of construction and actual meanings of amulets I select to wear on my person or carry in my wallet!
Posted by Jacobus G. Swart at 3:04 PM

I was wondering about talismans i found online on ebay, there is a set from the greater keys of solomons and the artists combined two seals from the same planetary group.

like two sun or two venus seals to fuse them.

What you make of this?