Shiviti Amulets to "Open the Heart"

Responding to a query posted on the "Concepts of Kabbalah" Yahoo egroup, I shared a unique Shiviti amulet which I thought would be of particular interest to readers of this blog. Considering the fact that the construct comprises primary kabbalistic teachings, I suppose it was quite inevitable that certain fundamental Kabbalistic doctrines regarding Divine Names should have come to be considered to embody "amuletic" virtues. In this regard we might consider the four "milui," i.e. the full spellings of the letters comprising the Ineffable Name, aligned with the "Four Worlds" concept, as featured in this Shiviti amulet for "purity of thought": 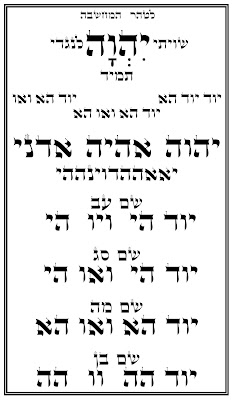 I am addressing this Shiviti Kamea, as well as another of a similar nature, in my "The Book of Seals and Amulets," and should mention that the details employed in this amulet necessitate careful consideration.We are informed that the attainment of greater understanding necessitates "purity of thought," and that it is good to work with Kavvanah, i.e. powerful attention conjoined with willful intention. These qualities of mind are generally understood to be powerfully engendered by Shiviti plaques and amulets, which we have already noted can be large sacred wall-hangings comprised of arrangements of Divine and Angelic Names, often beautifully illuminated with a selection of artistic adornments specifically meaningful to the composer of the item.We also noted that all constructs of this nature are named after the inscription usually located in the upper portion of the item. In this regard, we observe in the top centre of the Shiviti amulet, the four large letters comprising the Ineffable Name,

(YHVH), directly below the words

(l'tahar ha-machshavah—"for the purification of thought"), this being the fundamental purpose of the amulet under consideration. Conjoined with the words on either side and underneath the Ineffable Name, we read the earlier mentioned biblical phrase after which the construct is named:

(Shiviti YHVH l'negdi tamid—"I have set YHVH before me always" [Psalm 16:8]).Besides the fundamental intention of all Shiviti plaques, which is for us to daily keep our heart/mind focus on the Ineffable Name, the Kamea requires the owner to not only read, but to actually enunciate the Divine Name with the vowels indicated, i.e. chirik (ee) and patach (ah), thus sounding the Name "YiH’VaH" in the mind during the reading of the opening phrase.This action is followed by tracing and contemplating the displayed arrangements of component letter combinations and milui ("fillings"—full spellings) of

(YHVH), as well as the two Divine Names here affiliated and conjoined with the Tetragrammaton. The basic reasoning is that the different spellings of two of the three letters comprising the Ineffable Name, i.e.

, are fundamental in ascertaining the "levels of expression" of the Ineffable Name, in which the letters

(Heh) can be spelled

(Vav) can be spelled

(Vav-Vav). The three variations of spelling are termed:

Applying this to the relevant letters in

(Yod-vav-dalet Heh-heh Vav-vav Heh-heh) comprises the "Fifty-Two Letter Name of God," and in gematria the combination

, this being representative of the "Fifty-Two Letter Name of God."

(Yod-vav-dalet Heh-yod Vav-yod-vav Heh-yod) comprises the "Seventy-Two Letter Name of God," which is related to the "Name of Seventy-Two Names." This milui of the Ineffable Name is appropriately represented by the combination

As delineated in both my "Book of Sacred Names" and "Book of Seals and Amulets," such extended spellings of a number of Divine Names, e.g.

(Adonai), etc., have been employed for both contemplative and amuletic purposes in Kabbalah.Be that as it may, the design of the current Kamea is comprised of three basic sectors. The upper portion encompasses the earlier mentioned opening biblical phrase, below which is located three sets of full spellings of the letters of the Ineffable Name (milui d’alfin) as follows:

As clearly indicated, the full spelling in this instance is Milui d’Alfin, the expanded format of the Tetragrammaton titled the "Forty-Five Letter Name of God" or "Mah"-expansion. Contemplating the entire combination we read the full spelling of

(Yod Yod-Heh Yod-Heh-Vav Yod-Heh-Vav-Heh), a format of letters comprising the Ineffable Name which is sometimes depicted:

Referring to this image as the "Tetragrammaton Tetractys," I noted in "The Book of Self Creation" that "this image was often engraved on silver triangles and worn on the body as protective amulets," and further mentioned that "the four layers of Hebrew glyphs represent the 'Four Worlds,' four principles of manifestation, and four aspects of ones being, i.e. Tzelem or Guf, Nefesh, Ru'ach and Neshamah." Hence tracing the expanded spellings of this pattern in our amulet, is said to not only align the practitioner with the universal order of the "Four Worlds," but to actually trigger within every aspect of his being the Divine Power inherent in the mentioned expansion of the Tetragrammaton. After all, the "Mah"-expansion of the Ineffable Name pertains to ones own hands—the organs of conscious action or of giving and receiving which should be governed by mindfulness.The second and central portion of the amulet comprises the listing of three Divine Names and their unification into one great name in the following manner:

In Kabbalah these three special Divine Names are considered instrumental in the flow of Divine Abundance from Keter (Crown), the loftiest sphere on the sefirotic Tree, via Tiferet (Beauty) the central sphere, down into Malchut (Kingdom), the earthly realm of physical existence. Each of these spheres are aligned with one of the three listed Divine Names, specifically:

In seeing these three primary Divine Names and their ultimate union displayed centrally in the amulet under consideration, I am reminded of the Kabbalistic doctrine regarding the outpouring of "Divine Abundance" from its source in the Ultimate Unmanifest, and its flow into physical manifestation down the "Central Pillar" on the sefirotic Tree. In this regard, we are informed that the initial

(Alef) of both the Names

(Adonai) is a reference to the "Divine Essence" of

(Ain Sof) being funnelled as infinite Shefa (Abundance) into the realms of manifestation. In delineating this unique force-flow from Ehyeh via YHVH and Adonai into the whole of physical manifestation, Joseph Gikatilla wrote: "Know that the activity of the upper Name which is Ehyeh is the activity of absolute mercy, and that this is the Name that brings good and gives for free and has mercy not out of judgment but out of absolute mercy....." [Gates of Light]Of course, as I noted elsewhere, "in the entire concept of Ain Sof (the Infinite No-Thing) pouring out Shefa (divine abundance), the basic idea is infinity without any limitation whatsoever. There is simply no underlying motive of God being obliged to pour out Shefa because of a sense of pity for that which He emanated into existence. The basic function of divine creative emanation is Chesed, an enormous loving-kindness, not for any specific reason as such, but simply for itself alone." [The Book of Sacred Names]In this regard, I believe what is of paramount importance here is the location of the Ineffable Name, aligned as it is in this instance with Tiferet (Beauty). Again it was noted that the concept of Beauty should "not be perceived in a limited manner" since it "has something to do with things being harmoniously related together." Underlying this concept is a sense of absolute "oneness." "What I find so amazing about the way Shefa is being funneled down into manifestation is that, whilst it is being expressed in all the realms of manifestation in an infinite, ‘all-possible-possibilities’ number of ways, the 'many ways' are harmoniously related in a universal 'oneness,' and this is called 'Beauty'." [The Book of Sacred Names]As I gaze at the three unique Divine Names listed in the centre of a Kamea created with the intention of not only clarifying (purifying) mind, but also to "open the heart" to greater understanding, I am again brought to the realisation of how our sense of "separateness" in this world have lead to the loss of our primordial recognition of the divine unity between all aspects of incarnate existence, and how, "in order to restore the flow of 'Divine Abundance,' we have to realign ourselves with the perfect unity of the 'All,' i.e. reestablish balance with the 'Beauty' and 'Loving-kindness' of the Eternal One." [The Book of Sacred Names]
Posted by Jacobus G. Swart at 9:04 PM

That is a very nice sentiment. This may only be tangential but why is the name Ben (52) always listed last, after the name Mah (45) instead of in descending numerical order?

The construction of the "four expansions" of the Ineffable Name is not so much based on their numerical values as it is on the different full spellings ("milui") of the names of two of the letters comprising the Tetragrammaton, i.e. Heh and Vav.

As explained elsewhere, e.g. in "The Book of Self Creation" and "The Book of Sacred Names," the letter Heh can be spelled Heh-Alef, Heh-Heh or Heh-Yod, and the letter Vav can be spelled Vav-Alef-Vav, Vav-Yod-Vav or Vav-Vav. Investigating the three different kind of "spellings" [Milui de-Yodin (Yod filling); Milui de-Alfin (Alef filling); and Milui de-He’in (Heh filling)] in terms of the order of the four expansions of the Ineffable Name, we notice that the highest level [Atzilut-Emanation] is assigned to the Yod spelling exclusively, and the next level [Briah-Creation] to a mix of the "Yod" and "Alef" spellings. Next, the third level [Yetzirah-Formation] is in turn associated with the "Alef" spelling exclusively, and the lowest level [Asiah-Action] is assigned the plain, standard spellings, i.e. the letters in question are spelled with themselves, so to speak [Heh-Heh and Vav-Vav].

In other words, the order of the ASMAB [Av-Sag-Mah-Ben], is directly related to the interplay of the letters "Yod" [the initial of the Tetragrammaton] and "Alef" [the initial of the Name Ehyeh], and their, as it were, final "hiddenness" in the realm of materiality where everything and everyone appear to pertain to the reiteration of lower self expression in terms of physical existence, i.e. Heh-Heh-Heh-Heh-....., Vav-Vav-Vav-Vav-......, ad infinitum.

Jacobus, I came to your web page in my inquiry on the number 14. I liked your articulation of the 4 fillings helpful. It makes it accessible to others who may be less familiar with the teaching. Thank you.