In "The Book of Sacred Names," the second volume of "The Shadow Tree Series" I shared some details regarding a remarkable Divine Name, specifically Yohach Kalach

, the practical uses of which I addressed in the mentioned text. This Divine Name comprises the final letters of the words of Psalm 91:11

Translation: "For He will give his Angels charge over thee, to keep thee in all thy ways."

Regarding the term Yohach, we are informed that this is the Name of the "angel" in charge of Midot ha-Din, the "Qualities of Judgment," who is "appointed over divine vengeance," i.e. a "Divine Leveller," as well as a reference to the "avenging sword" of God, which pertains to the sixteen drops of wine spilled during the Pesach seder. In clarification we are told that the four letters comprising the Name Yohach

referring to the number sixteen and Hach

meaning "striking." Hence the sixteen drops of wine spilled during the Passover dinner, are said to indicate the sixteen edges of the "avenging sword" and also the Name by means of which Egypt was struck with the ten plagues recounted in the Hebrew Bible. Now, whilst the combination Yohach Kalach is found in many Hebrew amulets, there are several instances in which the Name Yohach is used without the accompanying Kalach. For example, I was taught to utter it seven times in rapid succession as an aid in solving difficult problems. Moses Zacutto mentioned a similar technique in his "Shorshei ha-Shemot," but in this particular instance this Divine Name is part of a set of five names, both divine and angelic, uttered seven times to invoke powerful "spirit intelligences" directly associated with these names, in order to find a solution to any difficult problem. The five names are:

The first two Divine Names, i.e. Yohach and Taftafiah, are easily recognisable, and the concluding two angelic names are equally decipherable, since they derive respectively from the roots

(Oz—"to take refuge"). Hence, these Angelic names could be interpreted "My guardian is El" (Natzari’el) and "My refuge is El" (Ozi’el). Very potent "spirit forces" to invoke in difficult situations. Tzamarchad, the remaining Divine Name in the centre which is often linked to Taftafyah and Yohach Kalach in Jewish magic, was derived from the concluding letters of the first five verses of Genesis chapter 1. It is said this Name is employed to bring confusion in the mind of the individual against whom it is directed. On the other hand, Henry Cornelius Agrippa, the Renaissance Christian Kabbalist, claimed

and its sister equivalent

, constructed from the first letters of the same verses in Genesis, are used respectively on the front and back of an amulet "against the affrightments and mischief of evil spirits and men, and what dangers soever, either of journey, waters, enemies, arms.....and by this Ligature they say that a man shall be free from all mischiefes, if so be that he firmly beleeveth in God the creator of all things." Here are the diagrams of this amulet portrayed as it appeared in the original Latin edition of Agrippa’s "Occult Philosophy":

Agrippa’s version of the Name

is however faulty. The last letter should be a Dalet

and not a Chet

, these being often portrayed in the same manner in the writings of the Christian Kabbalists. As is so often the case with Hebrew glyphs in Renaissance Latin works, it is difficult to distinguish between several letters, as for example in the case of the letter

(Kaf) used in the amulet currently under discussion. Hence, the Kaf in this unique Name has been mistakenly portrayed a Bet in both translations as well as later plagiarised offerings of Agrippa’s work. Be that as it may, there is a lot more to this very powerful Divine Name, which is directly related to the most primordial act of creation, as depicted in those biblical verses it was derived from. It has been suggested that its pronunciation should be Tzemiroch’da, this being in accordance with the vowels associated with its component letters in the said verses of Genesis, i.e.

These words represent the coalescing of "Earth" and "Water," "Light" and "Darkness," i.e. "elemental forces" made "One" in Tzemiroch’da. Now, as indicated, the combination

(Yohach Kalach) is quite common in protection amulets, and it is often employed in conjunction with other names, such as Achatri’el 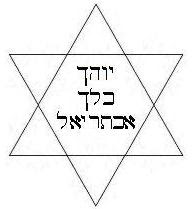 , who are inclined to attack and kill the humans they encounter. To protect ourselves against all pernicious powers of this nature, or to generally "clean" a home of an unfavourable spiritual ambience, i.e. its negative psychic atmosphere, as it were, we are instructed to work a special protection ritual. First the room in which you are working is smoked with a piece of lit sulphur. You then commence the creation of a protection amulet by writing at the top of a "kosher scroll," parchment, or a sheet of clean white paper, the Divine Name

(Hadiriron), and directly underneath it:

Amongst this set of Divine Names, collectively termed the "Signature of God," three are easily identified, i.e. Tzva’ot, Atneik and Tzortak. The remaining Names are somewhat obscure. I suspect they are related to the Divine Name Tiftufyah, hence could be pronounced Itufah Itufah Chitufah Nitufah. In terms of the pronunciation of the Name Taftafyah, they might well be based on the word

(Tuf) meaning "to drip" or "to sprinkle." It would seem that in this instance the actual vocalisation of these words are not of much importance, since these Divine Names are actualised, so to speak, by being moistened with ones personal body fluid. This is achieved by licking the Divine Names written on the parchment, and then to conclude the action by quaffing a little water. Following this portion of the instruction, you have to wait three days, after which you continue with the next stage of the ritual procedure if necessary, by writing the first six "Names" of the "Shem Vayisa Vayet" (Name of Seventy-two Names), these being:

Next write the following below these Names:

Translation: "Your Name will be greater than it was before, he will heal (.....fill in personal name.....) through the power of the holy letter-signs of the Name of Seventy-two."

Finally, the procedure is concluded by drawing the image comprising the Yohach Kalach Achatri’el combination shown above, and then to carry the entire construct, now a fully functional Hebrew amulet, on your person. As you noticed, the power of the amulet is enhanced by the presence of the first six letter-sign combinations from the Shem Vayisa Vayet. The "Name of Seventy-two Names" is understood to govern everyone and everything throughout manifestation. It does not only have rulership over the physical, e.g. bodies, limbs and ligaments, but also reigns over spirit forces like the Shedin, Lilin, Ruchin, Mazikin, Se’irim, etc.
Posted by Jacobus G. Swart at 8:12 AM

I just threw a note up on the Strategic Sorcery blog about your blog. Hopefully it will garner some attention.

As always your work is inspiring.

Dude, I just found your blog via Jason's shout out on Strategic Sorcery.

What can I say? This is fantastic stuff -I've certainly never seen this depth of analysis in the blogosphere.

PS - It's always nice to see a fellow Antipodean making a splash in these matters. Keep it up.