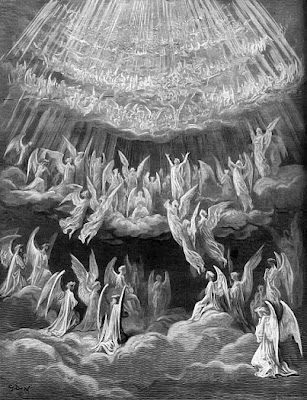 ﻿
I am "tying up loose ends" in my "The Book of Seals & Amulets," amongst which are brief introductions to "Spirit Intelligences," i.e. the "Celestial Hosts" and "Demonic Hordes," prior to addressing their appearance in Hebrew Amulets. I am personally quite fascinated by the amount of debate, sometimes heated, over the ages regarding the appearance and exact nature of "angels"; not forgetting the "scientific" approach deeming anything not clearly visible to the physical eye "fantasy" and "superstition." In this regard it has been said "the religious fancy and speculation of almost all nations has endeavoured to fill a wide gap which separates man from the lowest animals on the one hand and from the highest divinity on the other, by imagining the existence of a host of spirits, good or evil." [Rappoport, A.S.: The Folklore of the Jews, The Soncino Press, London 1937]

Now, whilst folklorists and a host of other "learned-ists" may dismiss "spirit forces" as mere fantasies of superstitious religionists, I am fully aware of the enormous mass of evidence to the existence of Spirit Intelligences which have impacted humans in both benevolent and malevolent ways. Hence my query in the "Book of Self Creation" whether "the scientist’s non-belief in ‘Spirits’ preclude the intrusion of such beings in their activities," and concluded "that humans are far more influenced by so-called ‘spirits’ than they know about."

Be that as it may, the names of angelic messengers and infernal forces appear prolifically in Kameot. In this regard, we are reminded that "within the name, that which bears the name is present," [Tillich, P.: The Eternal Now, Charles Scribner’s Sons, New York 1963] hence the first names of angelic agencies are employed in Hebrew amulets as virtual "conduits of power," each granting a specific kind of spiritual support towards an appropriately related physical, mental, emotional or spiritual purpose, the latter being always in harmony with the fundamental nature of one or more of these "Celestial Intelligences." Thus it has been written "There is not a thing in the world, not even a little herb, over which there is not an angel set, and everything happens according to the command of these appointed angels." [Yalkut Chadash quoted in Cassels, W.R.: Supernatural Religion: An Inquiry into the Reality of Divine Revelation Vol. 1, Longmans Green & Co., London 1874]

It is said the "elements and all the phenomena of nature are controlled and produced by the agency of angels," [Cassels, W.R.: Supernatural Religion] hence there are thousands of celestial hosts, i.e. Erelim, Galgalim, Serafim, etc., ruling over the heights and the depths. Individual Spirit Intelligences are also assigned the task of overseeing specific factors of physical existence, i.e. Uri’el governs thunder and earthquakes; Yehu’el is in charge of fire; Ruchi’el rules the winds, etc. However, sources do not always agree on the exact task of each Spirit Intelligence, hence

(Rami’el), and others are assigned rulership over thunder. Thus, when it comes to "Angels" in Judaism, not to mention Jewish mysticism, there are enough discrepancies and inconsistencies to confuse even the most hardnosed scholar.

Yet, whilst there are disagreements galore regarding the exact designation of an angel, some of the most heated arguments were reserved for the actual "nature" of angels, i.e. whether they were all "spirit" or sometimes "embodied," etc., and consensus is yet to be reached. For example, consider the famous dispute between Maimonides and Nachmanides, which so divided the Jewish world. Some agreed with the "rationalist" Rambam (Maimonides), whilst others "rationally" dismissed him like a spent penny in favour of the insights of the Ramban (Nachmanides). Regarding the "nature of angels," the Rambam maintained angels are incorporeal, and that they cannot be perceived in our ordinary awake state. He claimed the angelic visions of the prophets occurred during sleep. On the other hand, Nachmanides quoted several examples from the Hebrew Bible where angels appeared in human form and even pretended to eat. Hence the Ramban insisted that angels can be perceived via our ordinary senses, and that they do take on human form.

As far as depicting celestial beings is concerned, I noted in the "Book of Sacred Names" that humanoid depictions of angels,"comprise a relatively late phenomenon in Jewish writings," and that despite the "thou shalt not" statements  regarding "graven images," there are depictions of angels in Jewish literature, e.g. Jewish illuminated manuscripts. I also mentioned that "it is quite certain that those very vivid descriptions of angels in human and other forms in the holy books of Judaism, have powerfully impacted on the imagination of the ordinary worshipper, the indulgence of whose fantasising skills were being limited only by personal mindsets" and "many centuries of careful cultivation and control."

As indicated, it is understood that every single thing in existence has a Spirit Intelligences overseeing its existence. In this regard, it is believed that there are also "Guardian Angels" overseeing human existence. In fact, each of us is understood to have two such guardian spirits. As it is, we often see portrayals of such beings in humanoid form with long hair draping gracefully, the extended wings of a dove, robed in flowing, mainly white garments, and gracefully extending a protective hand.

Whilst many would happily acknowledge these sentimental images, it might come as a surprise to learn that in primary Jewish magical literature there are also descriptions of very large, heavy muscled, naked "guardian angels," whose appearance is probably more akin to the "Incredible Hulk" rather than "Superman" without his leotard and fancy cape! For example, one set of instructions involving the use of Divine Names, amulets, etc., for protection, also includes the visualisation of two angelic beings accompanying one like two body guards. To ones right is a naked spirit being who is brandishing an unsheathed sword and riding a white horse, whilst to the left there is another, equally naked spirit entity on foot, who is carrying a spear in readiness to defend one against an onslaught from any would be attacker(s). Elsewhere we find delineations of equally naked angelic beings, whose bodies are bristling with all sorts of weaponry. [Zacutto, M.: Shorshei ha-Shemot, Hotzaat Nezer Shraga, Jerusalem 1999]

I recall learning once that the depiction of the 6 pointed 'star of david' is in fact a representation of an angel with the top point being the head, the bottom point being the singular leg and the middle points being the wings with which their either fly or cover their 'legs' (2 for each). I do not know the source of this idea however.

Curiously enough, the "Magen David" was at one time considered to be a symbol of Metatron, "the holy intermediary between heaven and earth." [see Epstein, M.M.: Dreams of Subversion in Medieval Jewish Art and Literature, The Pennsylvania State University Press, Pennsylvania 1992]