In the previous essay I referred to Exodus 23:26 being utilised in an abbreviated format in Hebrew amulets to forfend miscarriage. Elsewhere the mentioned abbreviation is arranged into the following letter square, which is employed conjointly with the Names of eleven Spirit Intelligences for the very purpose of aiding a woman who has suffered a miscarriage or who has lost infant sons: 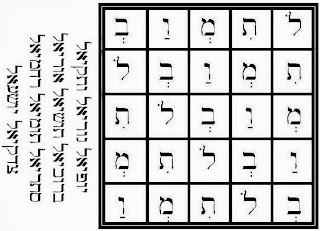 Inscribe the chotam (magical seal) at the top of a deerskin parchment or kosher scroll. Next write the following incantation below the letter square:

May it be your will, He who protects the souls of His devotees, to safeguard the fruit of her bowel with this amulet she is carrying on her, from all harm and bad incidents, from the loss of the foundations, since there is nobody else who protects and heals besides You, as it is written (Psalm 127:1) "Except YHVH build the house, they labour in vain that build it." Please grant compassion, protect and have pity and mercy on her that she will no more loose the fruit of her belly. Amen enduring (victory) selah forever. Amen thus be it so willed.

Continue by appending to the incantation the following abbreviation with vowels of Psalm 33:

As an aside, this abbreviation of Psalm 33 is equally employed on its own in an amulet to aid women who suffers miscarriage or cannot fall pregnant. In this instance the abbreviation is written on the inside of a bowl, or on a piece of parchment to be placed inside the bowl. The writing is dissolved in water, which is afterwards consumed by the woman seeking spiritual protection or to fall pregnant. This is done on the night of her Mikveh (ritual bath).

Be that as it may, the earlier Kamea, i.e. the one comprised of the letter square as well as the names of eleven Spirit Intelligences, is concluded with a set of special Divine and Angelic Names, specifically:

Whilst this essay is not meant to include an explication of all the Divine and Angelic Names included in the listed amulets. However, it is worth noting the importance of one of those listed here, i.e.

(B’dafti’el [some say Badpati’el]) which is termed the "Holy Light." We are informed that the name of the angel B’dafti’el prevents miscarriages, and appears "only on amulets that are made to assist women in childbed." However, it is worth noting that it is one of the angelic names employed to banish demonic imps and evil spirits from a residence. We are told B’dafti’el is aligned with the term

(B’mochsaz), the latter referring to, as it were, the "severe" (Gevurah) aspect of the word

This is great info and not something that is commonly accessible. I was curious as to why you promote William Gray's material as you seem to have a more traditional Kabbalistic understaning yourself and William was not adept in the Hebraic Wisdom rather he tinkered with Hermetic understandings. You state that you learned in Tvat and theat is far from the teachings of Gray.

I started my Kabbalah studies in Tzfat in the early 1970's, however, these were of the Lurianic variety, which absolutely precluded "Practical Kabbalah." Whilst I am a Jew, the "dry as dust" approach to Kabbalah did not sit well with me, and I started to seek for a more personal, so to speak, with hopes of finding possibly greater practical resources.

In this regard I migrated to the writings of William Gray, because his common sense approach to the sefirotic tree and Western Esotericism appealed to me. Amongst the reasons why I became his long time student, was that in my estimation he appeared to be a most ideal teacher, i.e. one willing to share what he knew, with his consciousness expanded enough so as to allow for other possibilities. What is more, I was satisfied that William Gray expressed his teachings set within the parameter of a fixed centre of kabbalistic principles whilst keeping the circumference fluid.

One should also keep in mind that William Gray attained his understanding of Kabbalah from a Jewish woman, a "White Russian," whom he met in Cairo when he was stationed there in the British army prior to world war II. Having learned Kabbalah from this lady, resulted in serious differences of opinion between himself and other "Hermetic Kabbalists."

Now, whilst his spoken Hebrew was not particularly good, William Gray read it well enough. In this regard, I gained an enormous amount from him, and he easily adjusted to "Hebrew pronunciation rectifications," so to speak, which I from time to time found necessary to bring to his attention. Between the two of us we set up the Sangreal Sodality in Johannesburg, South Africa, where I still reside and where I still head the first lodge of this brotherhood.

I personally found William Gray's material to easily align with doctrines and techniques found in traditional Kabbalah of both the theoretical and practical varieties, and have attempted to indicate such "alignments" in the first volume of the series of books I am addressing on this blog, i.e. "The Book of Self Creation."

I should mention that whilst I have been investigating Kabbalah and Jewish Mysticism really since the late 1960's, I have only in the last twenty or so years gained some understanding of "Practical Kabbalah." In this regard, the only writings I had access to in the 1970's and 1980's were the those of Rabbi Aryeh Kaplan, and the meditational texts of Abraham Abulafia, Chaim Vital, etc. A lot of the primary texts were simply out of print, or very poorly reproduced.

At the time I indeed owned some works on "Practical Kabbalah," i.e. Sefer Raziel, Sefer Rafael ha-Malach, Brit Menucha, etc., but had no real understanding of what this material was really all about, or why some or other Hebrew Divine Name is employed for a certain purpose and not for another in Jewish Magic.

My personal predilection is to delve into the vast arena of primary Hebrew resources, and for me this became personally possible only over the last twenty or so years. Hence my "The Book of Sacred Names" and "The Book of Seals and Amulets," the second and third volumes of the mentioned series of texts I am addressing on this blog, include material translated from primary Practical Kabbalah sources.

Thanks for your good explanation. I have a similar experience in that I studies Chassidut for years and eventually moved to a more serious study of the Kabbalah. I've learned under various rabbinic tutors but found the most sensible and practical exposition of Kabbalah from Z'ev Halevi and his Toledano Tradition. I now study the meditational aspect of Kabbalah mostly and found your blog after searching for a resource for info on practical Kabbalah.