Several magical uses of the four Edenic rivers still remain to be addressed, amongst which the most generally employed is their inclusion in amulets intended to aid women suffering difficulties during childbirth. For example, there is a unique magical practice which is enacted on the seventh day of the festival of Sukkot, i.e. Hoshana Rabbah (Great Hoshana). On this day it is customary to make seven hakafot (sacred circumambulations) in the synagogue, whilst carrying the Lulav and chanting Hoshanot (supplications).For those who do not know, the term Lulav, meaning a palm branch, is used in reference to the “four species” delineated in Leviticus 23:40, which are conjoined into a special construct during Sukkot, i.e. “branches of palm trees,” a single palm branch (lulav) which forms the backbone of the contraption; “boughs of leafy trees,” traditionally three myrtle branches (hadasim) located to the right of the assemblage; and “willows of the brook,” these comprising two willow branches (aravot) positioned to the left. It is customary to carry this palm/myrtle/willow construct in the right hand, whilst holding the remaining “species” which is a “fruit of goodly trees,” traditionally a citron (etrog), in the left hand. Since the “four species” are meant to be conjoined, the two hands are held together during the waving of the lulav.Regarding the relevant “magical practice” mentioned above, one is instructed to remove five unimpaired leaves from the willow branches after the completion the seven hakafot (circumambulations) and the conclusion of the Hoshana Rabbah prayers. One then has to write the names of the four “rivers” on these leaves, afterwards offering these to a woman who is suffering difficulties during labour, and who is said will then be giving birth forthwith.Now, whilst this practice is all good and well for any woman about to conceive in the immediate period following Hoshana Rabbah, one might well wonder what “magical support” could be employed for the same purpose at other times when there are assuredly many women who would be enduring problematic confinements. In this regard, there is, amongst others, the following very famous “birth” kamea (amulet) from the Sefer Raziel (Amsterdam 1701 edition): 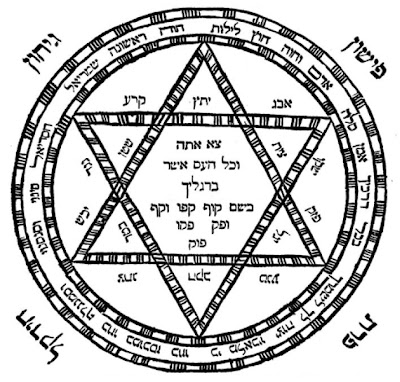 This amulet is equally employed to support a pregnant woman who encounters difficulties during childbirth. We are instructed that it should be written on a deerskin parchment, however I can attest that it works just as well when written on a sheet of clean, white paper. Afterwards the amulet is tied to the belly-button of the pregnant woman, and one has to whisper in her ear the phrase from Exodus 11:8 reading:

"Get thee out, and all the people that follow thee."

Besides the inclusion of the names of the four “Rivers of Eden” on its four corners, the outer circle of the kamea comprises the names of our “primordial parents” Adam and Chavah; Lilit, the mother of all demons; the names of angelic entities directly affiliated with the matter in question; certain Divine Names; as well as Psalm 91:11, these being:

The biblical saga of Adam and Eve is well known, but the tale of Lilit, the first wife of Adam, whose remonstrations regarding her marital status which ultimately resulted in her becoming the “mother of all demons,” is perhaps not so well known. We are told that she is not only a sexual temptress of the first order, who, according to the Talmudic legend, lurks around for shed seed, stealing it with the intention of creating demons, in order to torture mankind, but she is also a killer of infants. Regarding the latter, the three angels Sanoi, Sansanoi and Semangelof (or Sana’ui, Sansina’ui and S’man’g’lof according to the Shorshei ha-Shemot), were sent to stop her in her tracks, and hence their names are included in amulets protecting women during childbirth, as well as in those safeguarding infants. The peculiar term

(chutz), preceding the name of Lilit in the kamea, has been said to mean “away” or “outside,” however it was also suggested that the final tzadi

is a transposition of the letter heh

by means of the Atbash cipher. In this regard the word in question could then be perceived to be a hidden reference to

(Chavah—“Eve”), and hence it is claimed “the word itself is supposed to be protective for mother and child against Lilith herself.”The Divine Name construct

(Kuzu B’mochsaz Kuzu), the “Fourteen Letter Name of God” which I addressed to a certain extent in “The Book of Sacred Names,” was formed from the letters succeeding those comprising

(YHVH Eloheinu YHVH). We are told the latter Name pertains to the sphere of Mercy (Chesed or Gedulah) on the Sefirotic Tree, whereas the transposed version relates to the sphere of Severity (Gevurah), hence its inclusion as a measure of powerful protection in the “birth” amulet under discussion.Now, focussing attention on the central hexagram of the amulet in question, and starting top right and reading around from right to left, the outer borders and corners of the hexagram comprise the “Forty-two Letter Name of God,” i.e.

I have addressed the "Forty-two Letter Name of God" in great detail in "The Book of Sacred Names." In turn, the centre of the hexagram is comprised of the earlier mentioned phrase from Exodus 11:8, which concludes with the statement

and its permutations. In Hebrew the word

(Kof) refers to an “ape,” hence the inclusion of this term as a Divine Name in this amulet must appear most odd. An acquaintance made the tongue in cheek observation that the word in question might be referring to the “little monkey” about to issue from the womb of the sorely distressed woman, however, I believe there is a lot more hidden here than meets the eye of casual observation. For one thing, the mispar katan (small gematria) of

is 15 which is equal to that of

, the “Digrammaton,” an important and often employed abbreviation of the Ineffable Name. Furthermore, in perusing the six permutations of the Divine Name in question, it would seem that the central idea behind them is the principle of “opening.” In this regard we might note that the combination

, the concluding permutation in the set, which could be read Puk meaning “to totter” or “reel,” also indicates ideas of “producing,” as shown for example in the word

(heifik) meaning “to bring out” or “produce.” Furthermore, the letter combination also appears in words pertaining the concept of “opening,” e.g.

(pakach) meaning “to open,” as in opening the eyes or ears.In my estimation these ideas relate directly to the very fundamental purpose of this amulet which was constructed to “open the womb” so as to facilitate easy birth. Curiously enough, the six permutations of

are employed separately for the same purpose. In this regard, we are informed that they are to be engraved on a silver coin which the pregnant woman has to put under her tongue, whilst one whispers ten times in her ear a larger portion of Exodus 11:8 reading:

This verse is said to comprise several hidden meanings. For example, the gematria of the initials of the words comprising the opening phrase are revealing associations with special Divine Names, e.g. the initials Vav and the Kaf of

are said to pertain to the Ineffable Name, since the numerical value of these letters is 26, which is equal to that of

. The gematria of the initials of the succeeding three words,

, is 72, which is said to indicate the “Name of Seventy-two Names.” In turn, the numerical value of the initials of the words

with the addition of the kollel, the extra count for the word itself, and the gematria of the word

is 91, which is equal to the combined numerical value of the names

. We are also reminded that the numerical value of

, etc.Getting back to the magical technique in question, at the conclusion of working the ritual, the coin should be sold to an individual inside a synagogue or temple, and the money employed in the purchasing of olive oil which is to be donated to that specific place of worship.In a variant version of the foregoing techniques, we are instructed to write the six permutations of

on a cube of sugar, or on a piece of kosher candy, to be consumed by the afflicted woman, whom, we are told, will then give birth forthwith.

Hello
needs to get a better picture of this amulet. I lost an old and would like to make a new