The "Name of Seventy-two Names": A Biblical Spin-off - Part 7

Regarding the four expansions of the Ineffable Name, it would naturally be very useful to investigate all associations and related meanings, but space here would not afford such an intense investigation. This means we have to settle for the essential number 72 addressed in this chapter of "The Book of Sacred Names," and thus limit ourselves to AV

, the “Expanded Name of 72,” as well as to the related concept of the “cantillation notes” (Te’amim). As noted, this refers to the highest “World,” Atzilut, and, as it pertains to the actual chanting of the words and Names formed from the Otiot, it represents the elevation and exaltation of all existence through the medium of music and song.I have had the good fortune of listening to music in a vastly expanded state of consciousness, and I have yet to encounter another medium more capable of raising ones spirit to such heights of Divine realisation. It is thus no wonder that music and song is the expression of AV, the highest expansion of the Ineffable Name in the highest “World.” In this regard, we have the benefit not only of aligning ourselves through the medium of song with the highest “Realms of Being,” the “World” of the “Expanded Name of 72,” but we can achieve this by chanting the “Name of Seventy-two Names.”Now, the number 72 is related to the Tetragrammaton in yet another manner. The Ineffable Name is often presented in the form of a triangle comprising ten letters. It usually starts with the letter Yod at the apex, followed by Yod-Heh, then by Yod-Heh-Vav, and finally completed with the entire Yod-Heh-Vav-Heh construct, as shown below: 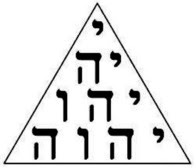 This image was often engraved on silver triangles and worn on the body as protective amulets. It is claimed that the four layers of Hebrew glyphs represent the “Four Worlds,” four principles of manifestation, and four aspects of ones being, i.e. Tzelem or Guf, Nefesh, Ru’ach and Neshamah. The ten letters comprising the triangle are also said to correspond to the ten Sefirot on the kabbalistic Tree of Life, and, as indicated in the following table, the combined numerical value of the letters comprising the construct is again 72: 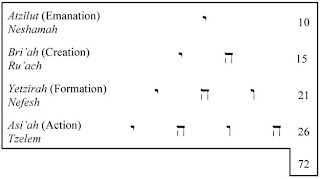 Of course, one might speculate that the four layers of this “Tetragrammaton Tetractys,” so to speak, would align with the earlier addressed division of the “Name of Seventy-two Names” into four sectors associated with the four glyphs and twelve permutations of the Ineffable Name.Be that as it may, as can be expected the seventy-two triplets of the “Shem Vayisa Vayet” have been divided into an assortment of segments for a variety of purposes. For example, in some arrangements the Name is divided into nine rows, each comprising eight segments. This specific division is understood to relate to what is termed the nine “rectifications” (Tikunim) originating in Chochmah (Wisdom) and Binah (Understanding).I certainly do not want to overburden readers with elucidations of complex Kabbalistic doctrines, however we might briefly note that these nine so-called “rectifications” are based on the concept of the “beard” (Digna) of the Blessed One which, we are told, is focussed in Binah, the Sefirah of Understanding on the Sefirotic Tree.To understand the meaning of this, we need to look at the process of “Divine Emanation” as expounded in Kabbalah. The “Creative Force” commences in Keter (Crown), and thence pours into manifestation via Chochmah (Wisdom), the “masculine” principle comprising pure, undifferentiated “creative force,” and Binah (Understanding), the “feminine” principle in which the “creative force” becomes differentiated, or “channelled” into forms or patterns.You will notice that the entire process is a union, as it were a “play” between “force” and “form.” In this regard, we are told that the “beard” of the Holy One, is drawn downwards because of the sacred union of Chochmah and Binah. This is said to be the hidden meaning of Psalm 118:5 reading:

Out of my straits I called upon the Lord; He answered me with great enlargement.

In this instance the hidden key is said to be

(Heh—Imma [“Mother”]), respectively associated with Chochmah and Binah, as well as their sacred union from which proceed nine “restorations” (Tikunim) of the “divine channels” through which Shefa, the “Divine Abundance”is drawn into our domain of existence. In Kabbalistic literature these “divine channels” are symbolically termed the “beard” of the Eternal One.Curiously enough, the “Name of Seventy-two Names” was also divided into two equal parts, each comprising thirty-six of the seventy-two Names. The first grouping commences with

, the first three-letter segment of the “Shem Vayisa Vayet,” and the second grouping with

, the thirty-seventh portion of the Name. These two groups are also respectively aligned with Chochmah and Binah, or with the “masculine” and “feminine” principles within Divinity. Again these two groups are often respectively arranged into six rows, comprising six Names each. These are called its “sides” or “edges,” six to the male portion and six to the female.We might note that the combination

(Ani Vaho) is part of a phrase employed as a Segulah, the latter referring to a unique action or an object, often comprised of Divine Names, special signs, words or phrases, which is considered to be a most precious “spiritual treasure” to be employed in a unique manner, in order to affect a physical outcome in harmony with the intention of the one who employs the Segulah. Regarding the Ani Vaho expression, the particular phrase utilised as a Segulah in times of great trouble, distress and oppression, reads:

This exclamation could be translated literally and succinctly to read “I and He save now!” Some readers may recall this phrase to be part of a Hakafah, a special circumambulating practice, which I addressed in the first volume of this series [The Book of Self Creation]. In fact, the very same phrase is traditionally employed in exactly this manner during the Hoshanot processions of Sukkot (Festival of Booths). These procedures are expounded in Sukkah 4:5 of the Mishnah.Be that as it may, in uttering the words “Ani Vaho” we are expressing the division of the “Name of Seventy-two Names” into the two groups comprising, as said, thirty-six Names each. This is believed to pertain to the “saving from the sea,” the latter being a reference to the Israelites being saved from the Egyptian onslaught when Moses split the waters, and the Israelites passed their way in peace on dry ground, so to speak (Exodus 14). Of course, this aligns directly with the plain meaning of the three verses from which the “Shem Vayisa Vayet” was derived.